In our last blog post, we had begun exploring the Land of Enchantment with visits to the White Sands National Monument and the city of Santa Fe.  It was difficult to tear ourselves away from Santa Fe but a bucket list item was calling – the Earthships in Taos, New Mexico.

I probably just lost a lot of you at “Earthship”.  Let me explain.  An Earthship is a totally self-sufficient off-grid home, made of recycled tires rammed with earth, adobe, bottles, cans, etc.  Edible plants are grown inside year round under huge windows, all of which of course face south.

Many, many years ago, we heard about Earthships and were immediately intrigued.  As we sometimes do, we launched head-first into our next project, buying the whole set of Earthship manuals and joining an Earthship “meet-up” group in Ottawa.  We actually went so far as to buy vacant land and have architectural plans drawn up.  So, as you can imagine, we’re pretty big fans and were totally nerding-out on the idea of visiting the real Earthship villages in Taos.

Earthships and Other Weird Dwellings

Before even getting near the Earthships, the area surrounding Taos was mesmerizing.  First, we drove through the gorgeous Rio Grande Gorge – but I’ll get to that in a minute.  Once Sally scrambled her way out of the gorge, we found ourselves on a huge desert plain, surrounded by white-capped mountains.  The plains were dotted with all sorts of weird dwellings… mobile homes, schoolies, tarp homes, plywood houses, etc.  A completely surreal experience.  Clearly urban planning and building codes aren’t much of a thing here.

Taos is literally the mothership for Earthships and as we pulled up to the Earthship Biotecture Visitor’s Centre, it felt like we were on another planet.  Long, low, earth structures emerged from the desert, barely distinguishable if it weren’t for some very funky ornamentation.  We steered Sally into the uneven, dirt parking lot and managed to snag a spot right in front of the Visitor’s Centre. 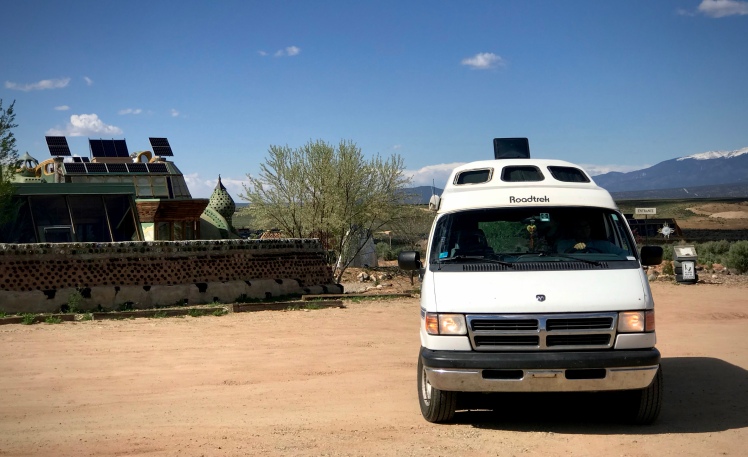 The Visitor’s Centre allowed dogs and right away, I knew these were my people.  We took the self-guided Earthship tour and were in awe that it was like seeing all the photos we’ve seen over the years coming to life.  The only underwhelming part of the tour was the short video, which was clearly made in the 90s (whoa, baggy pants!) and was playing in a loop on a DVD… dated is an understatement.  The tour ended in the gift shop and we were geeking out so much that despite usually being frugal, we bought 2 shirts and 2 stickers – splurge! 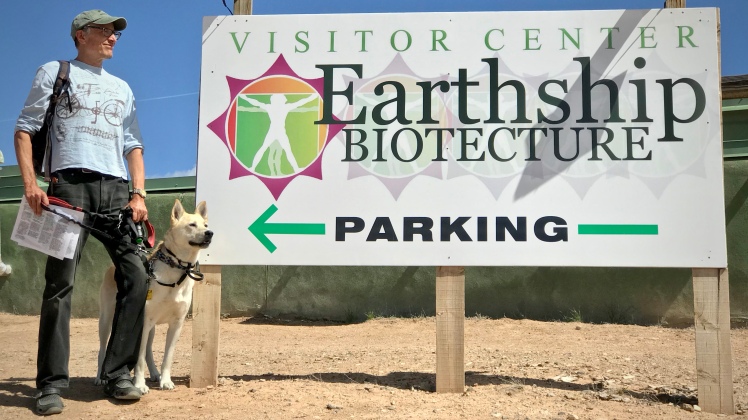 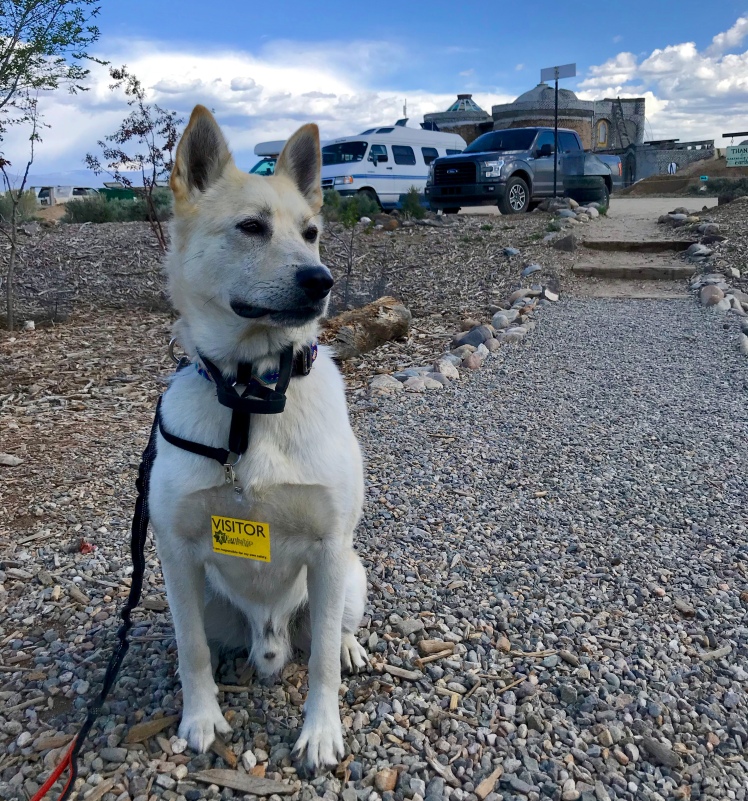 Upon finishing the tour, we headed outside to get a closer look at all the Earthship exteriors.  With the desert landscape and mountains in the distance, it was insanely picturesque.  The whole tour, inside and out, only lasted about an hour and a half but it felt hugely momentous after all the years of thinking about and planning an Earthship. 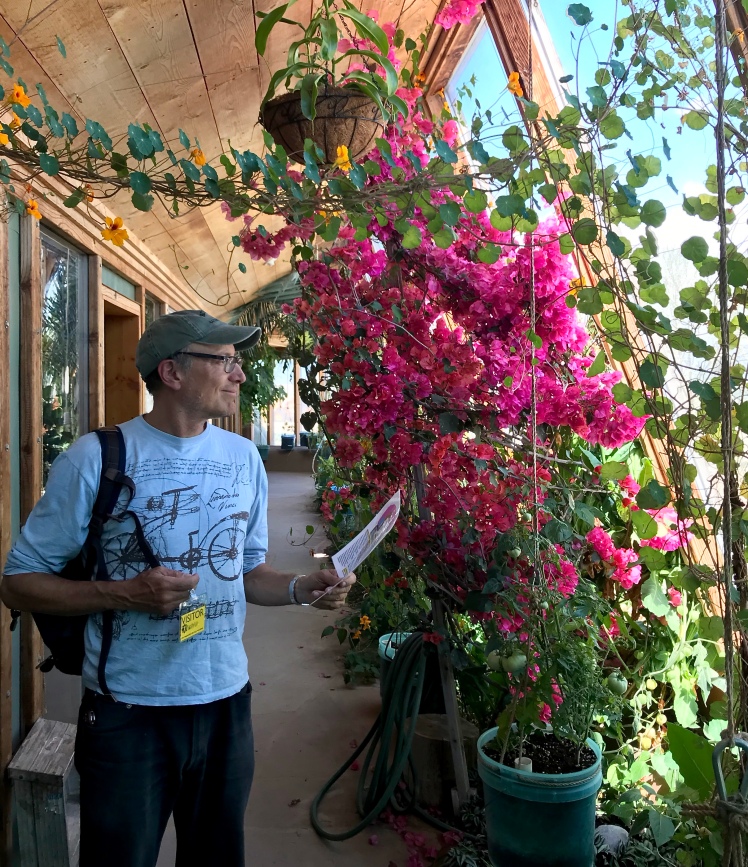 If we came for the Earthships, then we stayed for the Rio Grande Gorge.  Ok that’s not entirely true… we only stayed for a night… but we would have stayed at least a week if we’d had time.  We literally stumbled upon the Rio Grande Gorge because it was on the way to the Earthships.  As we drove through, we noticed that in addition to being rugged and beautiful, the Gorge had campsites. CHEAP campsites!  It was also full of hiking and mountain biking trails, guided river rafting tour put-ins, swimming holes, bridges, etc.  So after visiting the Earthships, we headed straight back into the Gorge to claim a $7 campsite.  Since we hadn’t had a real shower since old Mexico, we took advantage and vagabond-bathed in the frigid Rio Grande river, which passed right by our campsite. 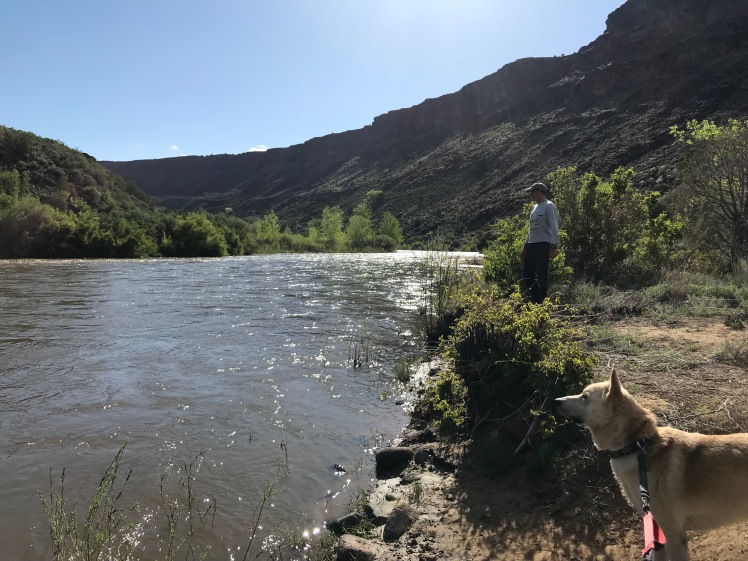 Unfortunately, we had to leave the next morning because we wanted to spend a little bit of time exploring the town of Taos before leaving for Colorado.  We did however manage to squeeze in a quick hike in the morning and was it ever worth it… breathtaking views of the gorge, cool cacti and a herd of mountain goats.  I was super thankful that I packed my zoom lens for this hike! 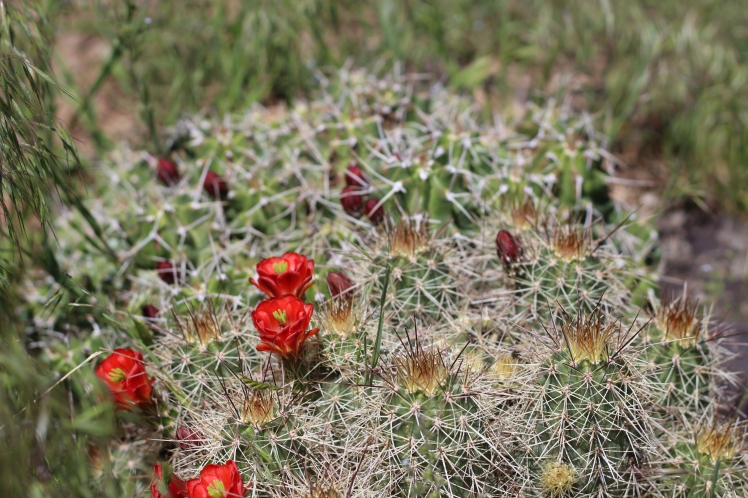 After a quick hike along the crest of the Gorge, we headed to the town of Taos.  We had heard that it was very alternative, artsy and quirky so we figured that we’d like it (we’re pretty alternative and quirky ourselves).  It didn’t take long to realize that although it’s small, Taos is packed with things to do and see and an afternoon wasn’t going to be nearly enough.  The town is filled with art studios, outdoor outfitter shops, cafes, restaurants and unique streetscapes.  A lot of people there look like they live in an Earthship or something similar (and they probably do)… very hippy.  I spotted an entire book devoted to the “Trails of Taos” – that alone made me want to stay a few more days and explore. Like other places in New Mexico, most of the buildings are made of adobe, which I’ve decided is one of my favourite building materials. 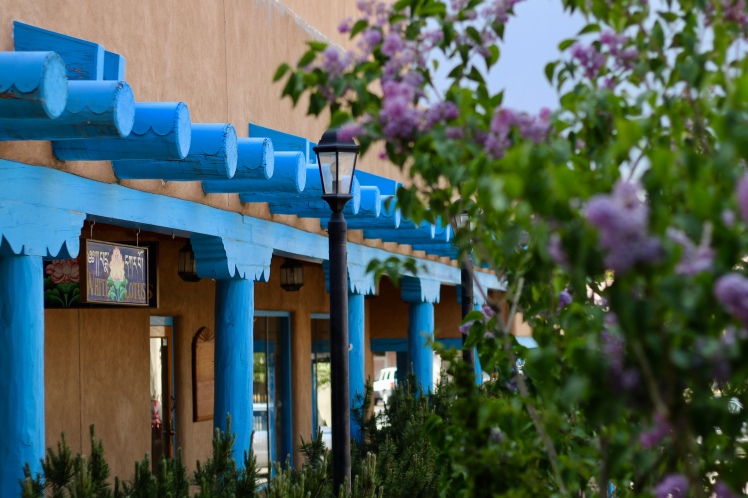 Knowing our time was limited, we walked as much of the town as we could and popped into a number of little galleries, some of which were dog-friendly (yay Taos!).  My favourite galleries were the coop galleries that where you could find the works of many local artists.  If I had to describe it, I would say Taos is to Santa Fe what Flagstaff is to Sedona.  If you’ve been to Sedona and Flagstaff, AZ you’ll know what I’m saying.  Aside from being talked at for about 45 min by a disgruntled artist trying to justify why he hadn’t quite ‘made it’, it was a lovely afternoon. 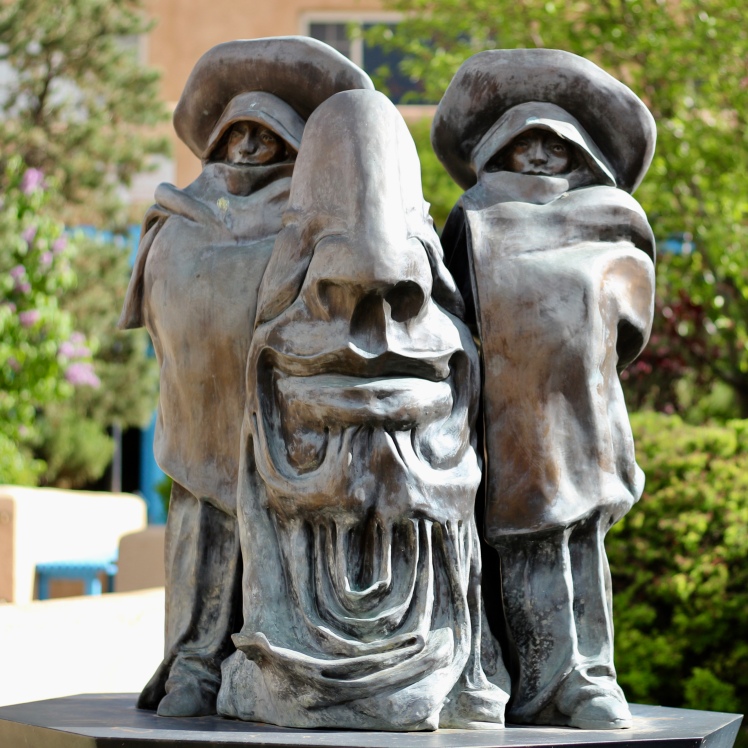 We would love to have spent longer in this area… a recurring theme on this trip home that continued to repeat itself as we drove north through Colorado.  But more about that in the next blog!